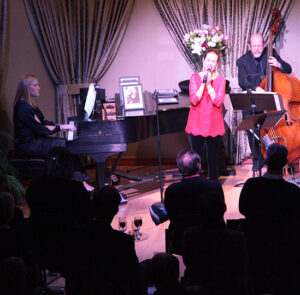 The Carson Series of Sammons Cabaret returns to Kurth Hall on Thursday, February 20, when the marvelous PEGGY LAUREN LOHR performs “Songs from the Red Carpet” in honor of the OSCARS® awards ceremony that takes place in February. Peggy and her husband, the accomplished pianist and 2017 Sammons Jazz Artist of the Year Bill Lohr, are no strangers to that glitzy Hollywood event; they have performed at the ACADEMY AWARDS® Governor’s Ball.

The remainder of the outstanding spring 2020 season of Sammons Cabaret features:

ANGIE MCWHIRTER — Thursday, March 19. The multi-talented Angie McWhirter is well-known to local cabaret fans. Her impressive gifts of song and positive spirit are matched by her mastery of multiple genres, which she demonstrates in her performance of “Little Bit Country, Little Bit Cabaret.”

CHRISTOPHER DEATON — Thursday, April 16. Actor/singer Christopher Deaton earned enthusiastic applause for his performance of Loewe and Lerner’s If Ever I Would Leave You at Cabaret & Cabernet last August. His formidable talent prompted a critic to declare “Deaton’s name and voice deserve to be all over the city.”

DAVID SLATER — Thursday, May 21. Singer. Songwriter, Pianist. Oh, and the male vocalist champion of TV’s Star Search, too. David Slater has worked with entertainers like Dolly Parton, Garth Brooks, and Wayne Newton. He indulges his love of “the old stuff” in his show, “Perfectly Frank: Celebrating the Songs of Sinatra.”

Sammons Cabaret concerts begin at 8 p.m. in Kurth Hall; doors open at 7:30 p.m. Admission is $45 per person or $40 for Sammons members and includes valet parking, beverages, and light appetizers. The Sammons members-only sales period runs through January 16; tickets go on sale to the public the next day. For tickets or membership information, call (214) 520-7788.

And the Grand Prize Winner Is …
Translate »
Scroll to top