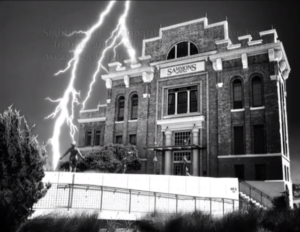 Art isn’t the only thing happening at the Sammons Center for the Arts. Strange events have occurred at the 110-year-old building since at least 1988. Employees have heard unexplained voices, noises, the elevator coming to life on its own, and even attempts to take some guests to the non-existent fifth floor.

After repairs and replacements, the elevator company is still at a loss. They report, “This shouldn’t be happening.”

An apparition has made an appearance from time to time and has been described as a young man, wearing overalls, a jacket, and a workman’s cap. Staff believe the building is haunted by a young man who was reportedly killed in the basement during an accident with machinery in the 1920’s.

Nicknamed “Otis,” this ghost seems to have a thing for ladies, and on some occasions, opens the door when a young woman walks by. The Sammons Center’s ghost has even been documented in two published books, Supernatural Texas: A Field Guide by  Brian Righi and Ghosts of North Texas by Mitchel Whitington. So the next time you are at the center and sense a presence, don’t worry — it could be our art-loving ghost!

A Cabaret Jukebox with Denise Lee

A Bounty of Arts: November 2019 Events
Translate »
Scroll to top